An introduction to La Chambre

From the beginning of our story, Artus has included me in his projects. At the time, I was working for a review of critical texts on art which published the latest research by great art historians and curators of French museums. I had also been the assistant to a contemporary artist in New York, and with him rubbed shoulders with the entire international contemporary art scene. At the same time, I was doing interviews with artists for magazines and I really liked the format of the interview. So it was only natural that we started to play this with Artus. We spent mornings, and sometimes even whole days, on the terrace of a café overlooking Boulevard Pigalle, when it was not at the McDonald's table overlooking the square.

I asked the questions and simultaneously transcribed his answers. I was trying, I think, to understand his approach, to organize his work, or maybe his thinking ... Artus was working tirelessly. He wrote texts every day, took pictures, made drawings, painted, and then threw himself headlong into a performance in a department store. He exhibited everywhere. In jewelry stores, cafes, bookstores, provincial concept stores. But his work was not seen much in the end ... I watched all this with a little concern. I couldn't help but compare all this energy deployed to the more focused ones of these other artists who have been raised to the rank of contemporary art stars. Where Artus strove to share his daily life and his story, anywhere and with anyone, they held fair with patrons and important people ... This comparison gave rise to endless discussions, on the square and the role of the artist, but also at the exhibition venues, the general public, the elites, professionalism, amateurism, etc.

I learned a lot during those few months of doing these first interviews. But the dialogue has not always been easy between us. We didn't have the same story, or the same experience. Artus was thirteen years older, I was a half-hearted journalist, a middle-class suburbanite, and he, an artist, the son of a prostitute and an aristocrat, stuck to his ideas. I asked the questions, between naivety and disagreement, questioned his positions which then seemed to me to be completely futile. Artus always ended up criticizing this or that system, which got on my nerves. It often ended in shouting matches, and I concluded by saying that it wouldn't happen if I continued to exhibit in lousy places… Of course, over time I started to change my mind.

Many of his exhibits from the period had something to do with the 12m2 bedroom he had lived in for 15 years before we met and I managed to get him to move. He had shown framed extracts of what he called his “Papiers Importants Divers et Variés”, produced an exhibition with photographs of people who had passed through La Chambre, also exhibited a canvas by the impressionist painter Marie Bracquemont that he had customized. He often spoke to me about the possibility of freezing this room in time forever. I had not seen the relocation of La Chambre to the Patricia Dorfmann Gallery in 2005, an exhibition entitled "I learned it from a talk show", but I had entered the room itself, and I had felt, from the first moment it's true, how this space had incredible power. It was through La Chambre, too, that I fell in love with Artus. I envied him also for having had available this space, however small it was, a room of his own, which had allowed him to become an artist, without having to worry too much about earning a living to pay his rent. And then, the more I entered into his work, into his intimacy, into his universe, the more I realized to what extent, yes, this room had the incredible power to make a work.

I then started to write texts and interviews on this crazy project. I submitted a first text in English entitled "The Room Project" to the design magazine Apartamento, in which I asked: "Is it the artist who makes the room or the room that makes the artist? ”, Which will ultimately never be published. To tell the story of his project, Artus often took as a starting point Marie-Antoinette's bedroom, or André Breton's study, places preserved by the state to bear witness to a lived experience at a given time. Like these heritage projects, he said he wanted to show La Chambre as a whole, without selection or sorting, with the works of course that came from them, but also unpaid invoices, cardboard computer boxes, books, the K7s, anything that could testify to the reality of a man who lived in the late 90s until the early 2000s.

From our meeting to this day, Artus, and therefore myself, have been pursuing this project. A utopian space that has taken up so much space in our lives. How to preserve La Chambre, store, archive, move its content, without much material means? How to preserve this place in the heart of the marsh in Paris, when we barely had the means to find decent accommodation? How to continue this project in the context of family life? When our son Anatole was born in 2012, we decided to move out of the huge loft that we shared with roommates in the 18th arrondissement. After spending a few months in the bedroom, we moved into a small apartment on Ile Saint Louis. Very quickly the burden of rent, work, expenses, lack of space, prompted me to ask Artus to rent the room to passing visitors. Then, I insisted again that Artus sell the chamber itself, even if it means separating the work from its walls. Where I was prepared for a thousand concessions, Artus stood firm and did not deviate from the rules he had set for himself. I admired his position, in theory, but in practice it gave rise to endless arguments. Ideas are on the one hand and money on the other. The subject of La Chambre had become a sensitive subject, but each time it resurfaced we always ended up looking for, and finding, solutions.

Its content, as it was shown at the retrospective exhibition at Patricia Dorfmann, had been stored in the house without value of a town of Mayenne, which Artus had inherited his stepmother. We started by unpacking all the boxes to piece together La Chambre in the attic, so that Artus could take a strict inventory. For weeks and months, often in the middle of the night, Artus scanned the negatives of thousands of photographs taken during the time he still lived there. Then, he photographed the objects, the documents, and also produced nearly two hundred self-published works in which are compiled the texts, the first drawings, the letters, all the possible traces linked to the project. Finally, the Mayenne house was sold, and the boxes had to be closed again, finding a place to store them. Relocated, once again, to a friend's house in Fontainebleau, the room project did not look good. All these dusty boxes were misunderstanding our loved ones, and my family.

During 2017, we finally made the decision to leave Paris, keeping the small apartment at rue Portefoin, in the 3rd arrondissement. The content of La Chambre has been reinstalled in the attic of our new house in the country. In our shared happiness, it reminds us of convictions, efforts, the world of ideas, the struggle. Pocket of resistance, determinism to be and remain free, to create in restricted spaces, to share indefinitely the same story, the same experience. That of Artus de Lavilléon, French artist, born in Paris in 1970, that of his mother too, Maryse Lucas, a great friend of Guy Debord, who lived there for a time with him at the end of her life, as well as the people known and lesser-known who have been there. The testimony of an era. 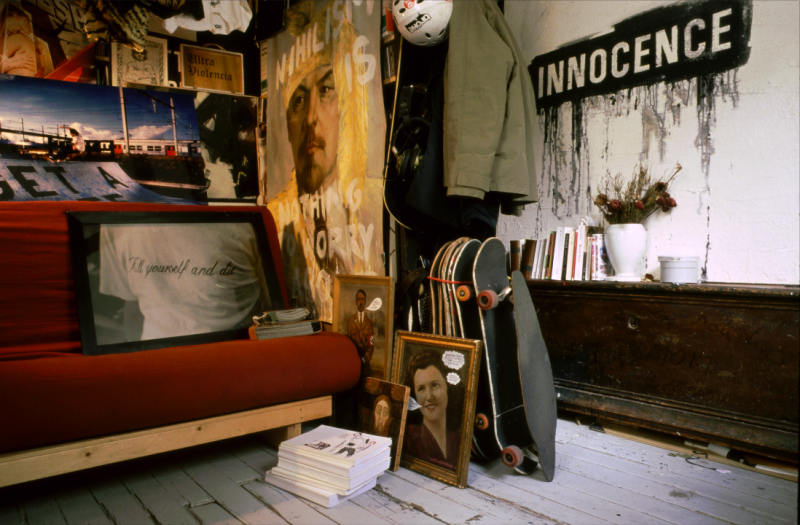 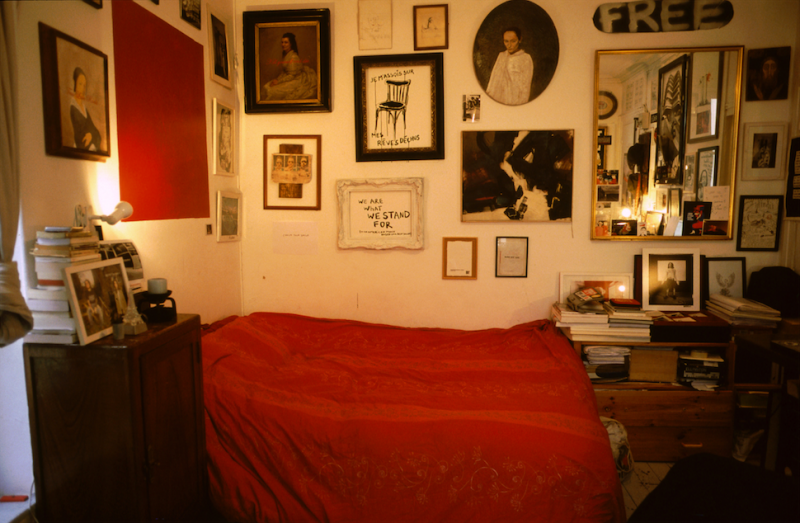 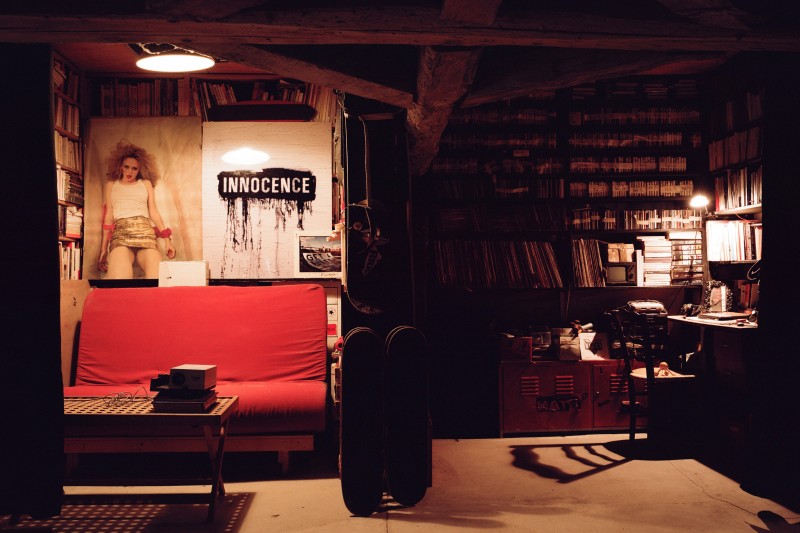 The Deadpan Foundation undertakes to continue the development of this project alongside the artist, by revisiting texts, documents, books, works, and all actions allowing the reinstallation of La chambre in the form of a retrospective, a decompartmentalization between the art and life. La Chambre is a work by Artus de Lavilléon, initiated in 1995. Located on the 3rd floor of a building in the 3rd arrondissement in Paris, it is characterized as a work by the desire to reflect the unity of a life and the desire to place the decision to become an artist at the heart of the work. Inhabited by Artus from 1995 to 2009, La chambre is organized like a pocket of resistance, in which the very evidence of this decision accumulates. By imposing on oneself the constraint of ...